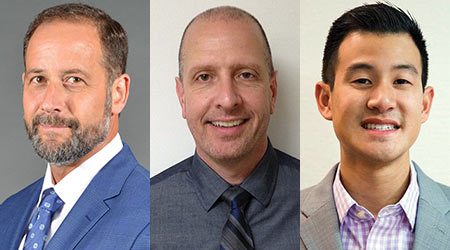 New promotions and positions have been announced following the recent retirement of Harry Babb, who served as Vice President of Operations/MIS at WAXIE Sanitary Supply.

Dave Helmick is the new Director of Operations in WAXIE Las Vegas. He joined WAXIE in 2011 as Service Center Manager and became the Las Vegas Operations Manager in 2015. Dave has made significant contributions to safety, operational success, leadership and revenue at his location and has continued to excel in his new role.

Aaron Lee has recently joined the team as a Director of Operations in WAXIE San Diego. Prior to WAXIE, Aaron held a position as an Operations Manager for Coca-Cola.

Dave and Aaron will share responsibility for covering all of WAXIE’s 20 locations in the Western United States by supporting operations and supply chain logistics.

Both Dave and Aaron will report to Eric Cohen, who has been promoted to Vice President, Supply Chain. As the former VP of Logistics, Eric’s new role encompasses several of Harry Babb’s former duties including real estate research and site selection, building enhancements, lease negotiations and the coordination and management of all construction projects. He will also be expanding his duties to include oversight of the Procurement Team, which will continue to strengthen and embolden WAXIE’s overall distribution functionality and supply chain capabilities.