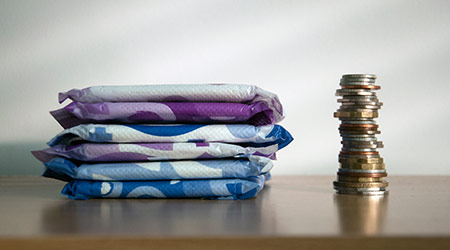 The student-run local chapter of PERIOD: The Menstrual Movement at Auburn University hopes to change the way the southern school supplies period products to its female students.

Following a number of donation drives to recover free menstrual products for students on campus, the chapter began working on a petition it hopes will answer period poverty issues at Auburn for years to come.

According to Moss, there are situations where female students will turn to socks, newspaper or trash bags while they're on their period because they can't afford tampons, pads, or other feminine hygiene products.

More than 460 people had signed the petition as of April 19. The chapter hopes to get at least 500 signatures. PERIOD believes that the more support it receives, the more likely that the university's administration will take the petition seriously.

A member of the Student Government Association who supports the petition says the ultimate goal is to have free menstrual products provided on Auburn's campus, even if that doesn't happen for a few more semesters.