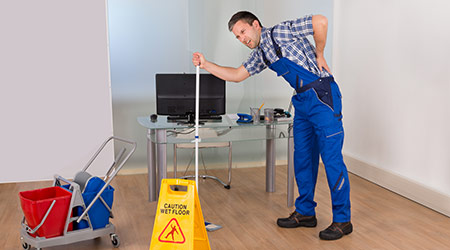 New research from the University of Minnesota, Twin Cities demonstrates the physical and emotional toll janitors undergo while doing their job, reports MinnPost.

The school conducted the survey and related studies in an effort to evaluate the work of janitors in Minnesota and help to jump-start research devoted to reducing injuries in the profession. Most of the subjects surveyed by the university are members of the Service Employees International Union Local No. 26, which represents about 4,500 janitors and commercial cleaning companies in the Twin Cities area.

One of the research studies surveyed 390 janitors, 34 percent of which say they had been injured while on the job within either six months or a year of the survey. Sixteen percent of those who say they were hurt recently also reported being admitted to a hospital because of the injury. The most common causes of injury cited in the study were repetitive motions and overexertion.

Lack of sleep also appears to be a contributing factor to janitorial injuries. The university's research found that janitors working the night shift were more commonly injured on the job than those who work in the morning.

Another one of the university's studies found that tasks causing heavy exertion — such as lifting large amounts of trash — caused more injuries than most other common tasks. However, the study found that, in general, common janitorial duties have a high risk of causing injury.

The University of Minnesota’s research could be used as a bargaining chip in talks between the SEIU and cleaning companies in the Twin Cities. SEIU says it is using the results of the research to strengthen its argument that the janitors deserve more sick days off and a paid 15 minute break for every four hours of work.

For a more comprehensive review of the studies, click here.