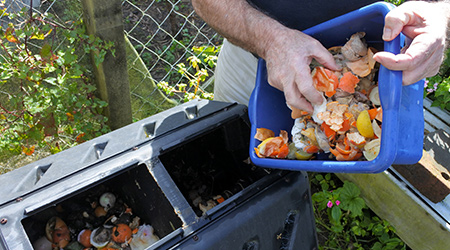 The University of Iowa has recently launched a composting initiative to educate students on what to do with organic waste, according to an article on The Gazette website.

A recent audit found that about 30 percent of waste going into the trash could be composted, according to Beth MacKenzie, recycling coordinator in the UI Office of Sustainability.

The student-centered initiative — which received $8,510 in start up costs from UI Student Government — will build on the composting efforts already underway in residence hall and other dining facilities across campus.

The pilot program began in 2007 and expanded to the residence halls in 2014.  Today the composting program diverts more than 325 tons of compostable “garbage” from the landfill annually. That includes more than 215 tons from the three participating dorm dining facilities.

UI Housing and Dining blends all the compostable material together into a pulper, which extracts water and creates discs that delivered to Iowa City’s industrial composting facility. There the material is transformed into “black and gold” organic matter for use on lawns and gardens.

According to a  2012 Natural Resources Defense Council report, Americans trash about 40 percent of the food supply annually throwing away about $165 billion. Reducing that total by just 15 percent would save enough food to feed 25 million Americans a year.