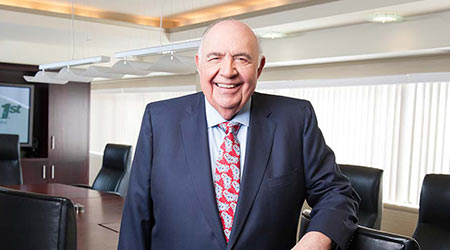 Former UniFirst Corporation CEO, Ronald D. Croatti, who passed away in May 2017, has posthumously won a Glassdoor Employees’ Choice Award recognizing the Highest Rated CEOs for 2017. Glassdoor, one of the world’s largest and fastest growing job websites, recently released its annual report honoring the Highest Rated CEOs, which highlights top leaders around the country who received the highest approval ratings from their own employees.

Mr. Croatti received an impressive 89 percent approval rating based on the anonymous and voluntary reviews UniFirst employees shared about him on Glassdoor throughout the past year. Among the 700,000 companies reviewed on Glassdoor, the average CEO approval rating was 67 percent.

UniFirst is a leading provider of workplace uniforms and facility services to businesses, large and small, within a wide range of industries throughout the U.S. and Canada.

“I can’t think of another CEO more deserving of this award than my brother Ron, and I only wish he were able to personally accept this honor,” said Cynthia Croatti, UniFirst executive vice president and Ron’s sister. “Ron’s whole life revolved around UniFirst and each one of our employee Team Partners, and he routinely took a personal interest in their lives…both in and out of the office.”

Robert Hohman, Glassdoor cofounder and CEO, had this to say, “CEOs tell us the Glassdoor Employees Choice Award is one of the highest honors they can receive because it truly reflects employee opinion about the job they do every day. I congratulate all the winners on this significant honor. We know that CEO approval ratings correlate to overall employee satisfaction and trust in senior leadership, which contributes to long-term employee engagement, ultimately helping an employer’s recruiting and retention efforts.”

When employees submit reviews about their company on Glassdoor, they are asked to rate various factors about their employment experience, including their overall satisfaction and other workplace attributes like senior leadership abilities. As part of these ratings, employees are also asked to rate whether they approve, disapprove, or are neutral about the job their CEO is doing.

Click here to see the complete list of all Highest Rated CEOs in 2017, which includes a number of cleaning manufacturers.