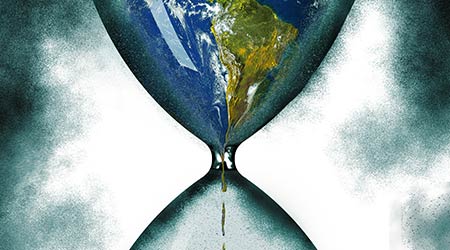 According to Steve Ashkin, the professional cleaning industry’s leading advocate for Green Cleaning and sustainability, there are terms related to climate change that many of us are unaware of — but should know.

“There reaches a point where if you lean back too far, you and the chair crash to the floor. That’s where we are now with climate change. We have a little time left to sit upright and prevent a calamity or sit back and crash to the floor.”

But that’s not the only term Ashkin believes we should understand. Others include the following

The Climate Change Ripple Effect. California is known as the breadbasket of the world, supplier of fruits and vegetables marketed worldwide. But state farmers are already abandoning “thirsty” crops such as almonds and avocados with many others expected to be abandoned as well. “The droughts, extreme heat, and now the floods mean fewer fruits and vegetables will be grown in California, less will be available worldwide, and costs will skyrocket. That’s the ripple effect of climate change.”

Earth Trajectories. View trajectories as pathways. “For thousands of years, we have been on a very hospitable pathway for humans and other living things. But if we reach the climate change tipping point, that pathway can be altered, turning the planet into a far less hospitable place.”

Hothouse Earth. When we set the oven at 400 degrees, it takes time to reach that temperature setting. “That’s where we are now with climate change. The temperature is rising, and as it does, more places around the world will become too hot to be inhabited.”

The Stabilized Earth. Some of the impacts of climate change are now irreversible. However, with rapid decarbonization — sharply reducing carbon emissions — “we can stabilize the earth, so that things do not get worse. This means there still is hope. We can’t give up.”