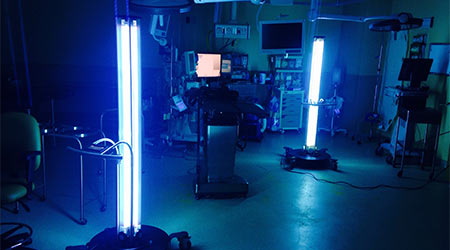 A new study published in the American Journal of Infection Control shows how St. Mary’s Hospital for Children used UV disinfecting to dramatically lower rates of viral infection among vulnerable pediatric patients, achieving a 44 percent reduction in viral infections over a 12-month period.

Pediatric populations already face a heightened risk for respiratory illnesses caused by viruses such as influenza, rhinovirus, enterovirus and human metapneumonvirus (HMPV). Because many of St. Mary’s patients have weakened immune systems due to existing illness, preventing infections and outbreaks is even more critical. To help, the team took a new approach to an old problem: using ultraviolet UV-C technology to enhance traditional cleaning and disinfecting protocols.

Automated systems that use UV-C, the highest-energy form of ultraviolet light, to kill pathogens by inactivating their DNA, provide an extra layer of protection and are used to reach areas of the healthcare environment that may otherwise be missed or insufficiently addressed due to human error.

From February 2016 to January 2017, St. Mary’s included the Clorox Healthcare Optimum-UV System as an adjunct to standard cleaning protocols on the toddler unit, the area of the hospital that typically experienced the highest rates of infection. The system was used two to three times per week in patient rooms and bathrooms and three times per week in common areas. No other new interventions were introduced during this time.

The results were dramatic. Infection incidence data from the 12-month study period showed that use of the UV-C system resulted in a 44 percent reduction in viral infections caused by influenza, rhinovirus, enterovirus and HMPV compared to the prior 12-month period when UV-C was not used. Interestingly the findings also showed that UV-C had a potentially compounding benefit when used over a period of time, suggesting that each month’s UV-C use builds on the pathogen reduction benefit of use during the previous month.

UV disinfection systems are user friendly and safe to operate. Because UV-C light is absorbed by the ozone layer, it isn’t harmful to humans. But when used for surface disinfection it inactivates pathogens by disrupting their DNA so that they can no longer grow or reproduce. Without the ability to reproduce, microorganisms are no longer infectious and die.

After setting up the device, the user exits the room and shuts the door before activating the system. After the cycle is complete, the machine shuts down, at which point the user can move it to the next location. If someone enters the room during the cycle, the machine will shut down immediately.

UV-C disinfecting machines are a nice complement to existing cleaning procedures and should never be used as a replacement for manual cleaning and disinfecting.