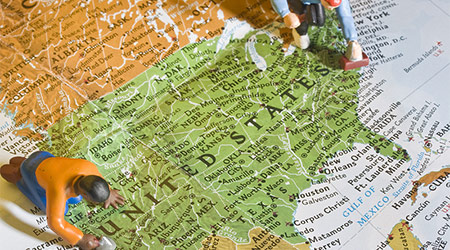 USGBC announced the Top 10 States for LEED, an annual ranking that highlights states throughout the United States that made significant strides in sustainable building design, construction and transformation over the past year. LEED is the world’s most widely used and recognized green building rating system.

Topping the list is Massachusetts, which moved from third to first place, with a total of 136 LEED-certified projects representing 3.73 square feet of certified space per resident.

“LEED guides our buildings, cities, communities and neighborhoods to become more resource- and energy-efficient, healthier for occupants and more competitive in the marketplace,” said Mahesh Ramanujam, president and CEO of USGBC. “The green building movement continues to evolve with advancements in technology, benchmarking and transparency, and the states on this list are leading the way toward a more sustainable future.”

Now in its seventh year, the ranking assesses the total square feet of LEED-certified space per resident based on U.S. Census data and includes commercial and institutional green building projects certified during 2016. Illinois and Colorado are the only two states to have made the list every year since 2010, and New York has returned to the rankings after a one-year hiatus.

A continued presence on the list from Maryland and Virginia has reaffirmed the mid-Atlantic region, which includes Washington, D.C., as the center of green building. While Washington, D.C., is not included in the list of top states, due to its status as a federal territory, it is notable for its 29.04 square feet of LEED space per resident, more than any individual state.

This year’s list has the highest average (2.55 square feet) per capita of LEED-certified space among the top 10 states since 2010. Four of the nine states included in the 2015 list increased the square feet of space they certified per resident in 2016 (Massachusetts, Colorado, California and Virginia). The full ranking is as follows:

*Included in 2015 Top 10 States for LEED list
**Washington, D.C., is not ranked because it is a federal district, not a state.

Notable projects certified in 2016’s Top 10 States for LEED include: