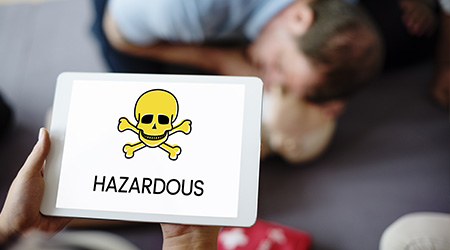 Two Georgia men with mental health issues attempted to protect themselves from COVID-19 by drinking cleaning chemicals, according to the Georgia Poison Center.

The men were said to have attempted to clean their bodies by drinking the toxic chemicals over the last weekend in April, reports the Atlanta Journal Constitution. Remarkably, the men were already the second duo of Georgia citizens to try and protect themselves from COVID-19 through the consumption of chemicals.

Sadly, Georgia has had troubles with chemical poisonings during the nation's shutdown, as emergency calls for poisoning between March and April 2020 were more than double of those made during that same span in 2019. Most of those poisonings occurred when people incorrectly mixed together cleaning products, causing a chemical reaction that sickened them.

America as a whole has a huge chemical poisoning problem right now. The National Poison Data System received more than 45,000 calls related to cleaner and disinfectant exposure between January and March. That's 20 percent higher than during that same span in 2019 and 16 percent higher than that span in 2018.