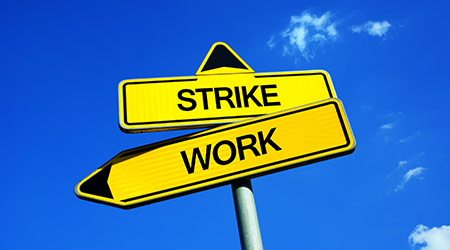 Thousands of the janitors and security guards who help care for and protect stores and commercial buildings throughout Minnesota’s Twin Cities have authorized a strike if current situations do not change, reports the Associated Press.

Service Employees International Union Local 26, which represents the workers, voted to support a walkout if an agreement isn't reached between the employees and the people who pay for their services.

Minnesota Public Radio reports that a disagreement over how much sick time is allotted for the workers has become a key issue. SEIU Local 26 hopes the workers it represents will be given six sick days a year instead of three.

Like in most protests involving janitors, the wages these workers are earning in the Minneapolis-St. Paul area is also an issue.

While janitors voice their unrest in the cold of Minnesota, others are voicing their displeasure in a more sunny California, reports NBC San Diego.

More than 100 janitors and community members walked through San Diego asking for a new contract for immigrant workers. Janitors also held rallies in the Bay Area, Los Angles and Orange County, California. Twenty five thousand janitors across the entire state are expected to become involved in the campaign for a new contract.