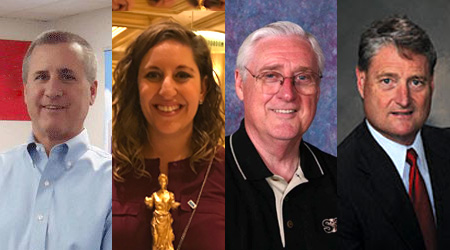 ISSA/INTERCLEAN Las Vegas 2017 was a great success for Triple S Membership. In addition to all the great meetings, networking, and product showcases at the show, we are proud to report that three individuals from the Triple S Membership were honored for their contributions to our industry, and one was elected to a leadership position.

Michael Tighe, president of ICPI, was awarded an Industry Special Achievement Award by the ISSA Young Executive Society for his leadership contribution to the advancement of the industry.

Michelle Munvez, vice president of Chemcraft Industries, was awarded the Hygieia Network Rising Star of the Year Award, awarded to a woman under the age of 35 who has made an outstanding contribution to the cleaning industry that fulfills one or more goals of the Hygieia Network.

Jim Chittom Jr., president of Roman Chemical Corporation, was recently elected to ISSA’s 2018 Board of Directors and will serve as the Board’s Executive Officer.

“We congratulate these individuals on their achievements,” said Eric Flinton, president of Triple S, “Their successes showcase the drive, passion and commitment to excellence that define Triple S Membership.”