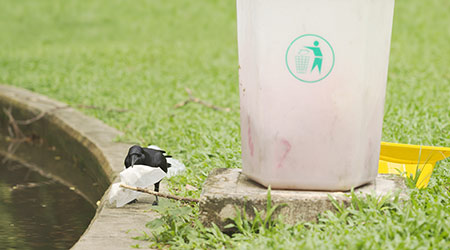 One of the largest theme parks in France, recently announced a new system for keeping its grounds clean, according to an article on the One Green Planet website.

To back up its human cleaning staff, Puy du Fou, has trained six rooks (a type of crow) to pick up cigarette butts and other litter. Before the rooks were put on maintenance duty, they played supporting roles on the park’s falconry show — responsible for picking up roses and bringing them to a princess.

Puy du Fou falconer Christophe Gaborit came up with the idea to teach the birds to pick up trash. Gaborit started training some rooks with bits of paper or cigarette butts, dropping them in a little box.

The activity has become a game for them, according to park President Nicolas de Villiers. The birds pick up the papers and they are rewarded.

Birds in the crow family are known to be intelligent — in the wild, they use tools and have been observed making plans. Crows remember faces and, when fed by a human, have been known to give gifts in return, according to an article on the NPR website.

The rooks each work a four-day week under close supervision to make sure people aren't dropping trash just to make more work for them.

The purpose of the crows is to educate the people, to open their minds, to realize that if the birds can pick up trash, people should be too, according to de Villiers. The park emphasized that the birds are not replacing any human cleaning staff.