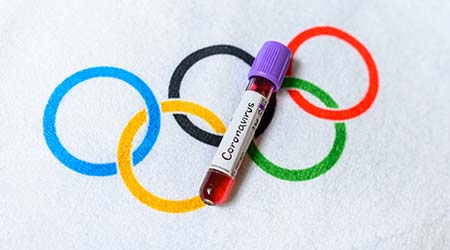 Regardless of the year, the excitement of any host city for the Olympic Games comes with a wealth of responsibility and stress for ensuring that the competitions run both smoothly and safely. For Tokyo later this summer, the ‘safely’ part has reached an unprecedented level — and the measures they are taking are indicative of that, according to Bloomberg.

By all indications, the initial hurdle — whether or not the games would even happen — appears to have cleared. Yet in order to keep it that way, organizers have to view every factor of infection control — from gatherings to alcohol to contraceptives — under a light they never would have imagined. With over 78,000 total participants, including athletes and volunteers, the task is tall, but they’ve come to some interesting conclusions; at least for the time being.

Contraceptives
After initially planning to distribute 150,000 condoms to athletes during the duration of the games, organizers came to the conclusion that it would be contradictory to do so while also banning dining and general socializing during the same span. Instead, the decision is to currently send the athletes off with the condoms as a parting gift at the conclusion of the competition.

Alcohol
For the majority of the past two months, most bars and entertainment venues nearby the games were asked to refrain from serving alcohol in a virus-suppression effort — notably when masks were removed in order to drink. With no fans now being allowed at Tokyo venues, the decision to ban alcohol in those locations went hand-in-hand. As it stands at the Olympic Village, however, the current decision is to allow athletes to have alcohol on the premises. Food delivery services such as Uber Eats, which are capable of delivering alcohol to particular athlete rooms, are currently disallowed over concerns of large orders being potentially ordered — although this decision has faced blowback due to the possibility of athletes wanting to avoid the dining hall altogether for safety reasons.

While these decisions are interesting, keep in mind that these stances appear to evolve with new information on the state of COVID-19 in the city, and could change altogether in a matter of weeks — along with the status of the Games itself.