Mosquitoes are a major health concern because they are known to be carriers of several diseases, but there are steps that facility managers can take to minimize the threat of these pests.

Pest control leader Orkin recently recently announced a list of Top Mosquito Cities, but they also released suggestions on how to prevent the pests.

This list ranks cities by the number of mosquito customers served by Orkin in 2015: 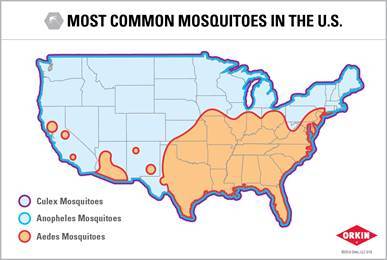 As temperatures increase, so will the threat of mosquito-borne illnesses like Zika virus. While June, July and August are the prime months for mosquito activity, mosquito season can begin as early as March in the southern part of the United States where temperatures are warmer. Mosquitoes affect people in every state in the U.S.

Most Common Mosquitoes in the United States:

•  Culex Mosquitoes: These mosquitoes are in every state and can carry and spread West Nile virus. They are most common at dusk and dawn.

•  Anopheles Mosquitoes: In addition to spreading Malaria, which has been considered eradicated from the United States, these mosquitoes can transmit dog heart worm and other viruses. They have been found in every state and are most active at dusk and dawn.

“There is no vaccine for Zika virus, Chikungunya virus or West Nile virus. The only protection is preventing mosquito bites, so anyone who spends time outdoors during the spring and summer months needs to take precaution by eliminating standing water where mosquitoes can breed,” said Ron Harrison, Ph.D., entomologist and Orkin technical services director.

Eliminate Standing Water
• Remove standing water from gutters, buckets and other containers, as mosquitoes can breed in just a few inches of standing water.
• Keep pool/fountain water treated and circulating.

Eliminate Entry Points
• Use air-conditioning when possible.
• Close gaps around windows and in walls.
• Encourage the use of revolving doors.
• Repair and use window and door screens to help prevent entry.