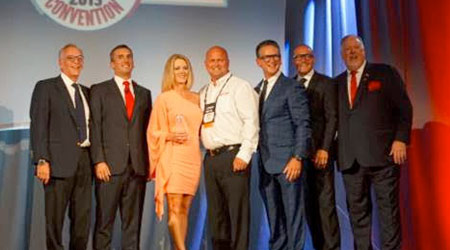 PuroClean, a national restoration and remediation franchise, honored several outstanding franchise owners at its international convention held this week at the Detroit Marriott at the Renaissance Center in Detroit, Michigan. Awards presented included Franchise of the Year and Rookie of the Year, among others.

“It is a privilege to spend time during convention alongside our franchise owners as they go through various training sessions and network with each other, executives, support team members, our strategic partners, and vendors,” said Mark W. Davis, Chairman and CEO. “All of our franchise owners play an integral role in helping to make PuroClean a world-class brand and it is rewarding to connect with them, while offering them the support they need to continue to grow their business.”

PuroClean franchise owners who received awards for their efforts this year include:
•  Jeff Rush from Greenfield, Indiana, who was awarded Franchise of the Year for excelling in sales growth, market share, sales revenue, profitability, and the number of continuing education classes conducted.
•  Ivan Oliver and Karina Esparza from San Antonio, Texas and Oksana Magda and Igor Sinelnyk from Saskatoon, Saskatchewan, Canada who were awarded Rookie of the Year for highest sales percentage growth in the first 12 months of business.
•  Jerral and Chrystal Ingle from Fort Payne, Alabama, who were presented the Hotshot Award. This is given to the franchise owners who have the highest sales percentage growth from 2017 to 2018.
•  Jim Bauer from Frisco, Texas; Chris Tucker from Arlington, Texas; Sonia Gonzalez from Glendale, Colorado; and Jason Reis from Cambridge, Ontario, Canada who were named Rainmakers by fellow franchise owners for balancing personal success with helping the PuroClean Network.
•  Thomas Maguire from Spartanburg, South Carolina who earned the Becky Edgren Continuing Education Award for hosting the most Continuing Education classes — 54 —in 2018.
•  Chris Sanford from Warwick, Rhode Island, who was given the Brand Promise Award for teamwork, loyalty, camaraderie, service excellence, and dedication to the brand.
•  Eric Jacquez from Tom and Bonnie Lanyon’s Victorville, California office, was awarded Technician of the Year for exceptional service.

PuroClean also recognized Aramsco/Interlink Supply for the fifth consecutive year as its Strategic Partner of the Year for their outstanding support, education, and accessibility. Additionally, Jack Boyd, Executive Vice President of Business Development at PuroClean, was awarded the first-ever Servant Leadership Award for his commitment to the brand, his servant leadership to franchise owners and support team members, and the impact of his industry experience on the company’s business development expansion.

“It is very exciting for us to host our convention in Detroit, so close to the hub of our thriving Canadian business,” said Steve White, President and COO. “We get one week each year to join together to celebrate our brand, our team, and our franchise owners, and Detroit is the perfect place to do so.”