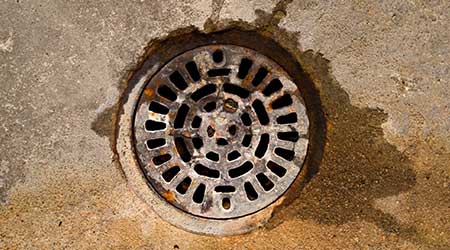 Many schools and commercial facilities are impacted by what is typically known as sewer odors. This is an odor problem that can be worse in areas of a facility that are used infrequently.

However, many building managers don't know what causes sewer odors in a building. So, to bring them up to speed, Waterless Co., which manufacturers drain and pipe care products, presents "Five Things Everyone Should Know About Sewer Odors."

What causes sewer odors?
Sewer odors are the result of gases that contain such compounds as hydrogen sulfide, ammonia, carbon dioxide, methane, nitrogen, and hydrogen.

Why do sewer odors smell so bad?
Hydrogen sulfide is usually the chief cause of the odors, along with ammonia.

• A blocked vent. Every facility has a vent system specifically for the plumbing in the building. If this venting is blocked, odors can't be released outside and build up inside the building.

• A damaged drain line. In some cases, the drain line may develop a crack or be broken. This can cause sewage to be released under or in the facility instead of being carried away, releasing odors.

• A dry trap. This is the most common cause of sewer odors. A trap is the U-shaped pipe or tubing, which connects the drain to the sewer line. If the water held in the trap dries out, it releases odors into the building.

What should we do if we detect sewer odors in our building?
Take the easiest and least expensive steps first. If the odors are coming from a drain, pour about half a gallon of water down the drain and wait a day or two. If the odors dissipate, it indicates that the trap was dry.

However, this is a temporary fix. The trap will likely become dry again very soon. To address this, use a drain trap liquid to keep the trap filled for months, if not years. This will eliminate the odors associated with a dry trap.

If adding drain trap liquid does not solve the problem, cleaning the drain might help. This will remove bacteria, which may be causing the odor.

Finally, if sewer odors still persist, a plumber should be called in to investigate. A crack may have developed in the drain line, and this can be repaired only by a plumbing professional.