It was huge regret and great sorrow that Vectair Systems announced the death of Tom Valentino their North American VP of Sales and Marketing.

Tom died at home on September 25, 2014 following an 18 month battle against cancer in the company of his wife Kristie, his twin daughters of 10 years, Lauren and Lindsey and his close family. Tom was 51 years young.

Respected and loved by his peers, Tom was instrumental in Vectair’s North American success, having been with the Company almost since its’ inception in Memphis in 2007. Tom was born in Albany, New York and honed his skills in the Cleaning Industry with ZEP as a salesman for 15 years, before becoming a Director of Waterbury Inc where he managed key accounts including LaGasse Sweet prior to joining Vectair.

His responsibilities at Vectair included the appointment and management of the Company’s Representative program, Private label accounts such as Prolink and Triple S amongst others and the development of business from the ground up. 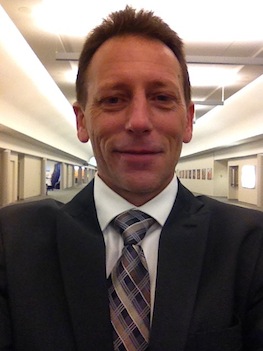 Tom was an extremely well-liked individual and had that rare ability to be comfortable in every environment or situation irrespective of the culture or the hierarchy. He was one of those people who lit up the room with his effervescence, positivity and his good nature. He was tenacious, had remarkable willpower and a will to succeed.

Everyone who met Tom recognized his remarkable spirit as in the fight against cancer he was always positive, never once complained or felt sorry for himself and was a true inspiration to many for his positivity and the will he demonstrated to beat this terrible disease. In all that time he never forgot his true friends, his responsibility to his employer and to his peers.

Our public thanks go to this remarkable individual who taught many that even in the darkest time of your life there is always the shining light of hope. His pragmatic approach to life in the twilight of his time with us and his fantastic courage in the face of the most daunting of situations will stay with us forever.