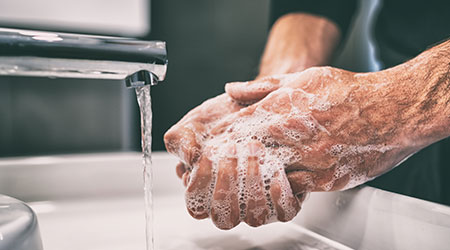 Today is Global Handwashing Day, but it’s going to be a little more difficult to celebrate. That’s because a new national survey found a 14 percent decline in frequent handwashing among Americans since the start of the COVID-19 pandemic.

The research, which was conducted by Ipsos for the American Cleaning Institute (AC), both in March and again in September 2020, tracked changes in consumer cleaning behaviors spanning the first six months of the pandemic in the U.S.

During a time when cases of COVID-19 are back on the rise, and Americans are preparing for cold and flu season, this decline in handwashing can put people at risk. According to the Global Handwashing Partnership, handwashing is known to help reduce the spread of outbreak-related pathogens and can reduce acute respiratory infections by 20 percent.

Additional findings from the ACI survey show that hand sanitizer use is on the rise (62 percent in September vs 46 percent in March). While hand sanitizer plays an important role in reducing germs when soap and water are not available, handwashing remains the gold standard to reducing disease transmission in communities.

“Washing your hands with soap and water for at least 20 seconds is one of the most simple and effective measures to take in the fight against COVID-19 and other easily transmittable diseases,” said Melissa Hockstad, ACI president and CEO, in a press release. “As we gear up for the coming cold and flu season, we hope to equip everyone with the knowledge and tools they need to practice proper handwashing.”

When washing one's hands with soap and water, a person should lather the back of their hands, between the fingers and under the nails.

The following are important situations where hands should be washed:

- Before, during and after preparing food

- Before and after caring for someone who is sick

If soap and water are not available, ACI recommends using hand sanitizer as an alternative. For use against COVID-19, look for an alcohol-based sanitizer with at least 60 percent alcohol content.