The Struggles Janitors Are Facing 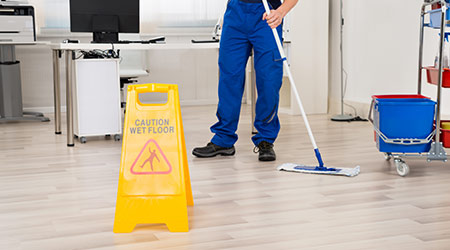 Martha Lorena Cortez Estrada, a janitor in Miami making $8.56 an hour, reports having to use worn-out, beaten down brooms when she cleans one office tower in the city. When she mops, she's using just water because disinfectant isn't supplied. She's also had to make her own masks and bring in hear own cleaning products.

Another problem is the way some companies are inaccurately advertising cleaning. For example, the tower Cortez cleans claims expanded janitorial services. When those services do occur, it's only in common areas.

With the help of a union, Cortez and her coworkers were able to get their employing agency to provide more supplies. However, she says her supervisor began treating her poorly after this and she was eventually fired for using a microwave she had purchased to make popcorn.

Servicon CEO Laurie Sewell tells the times that cleaning standards have been poor for years, not just around the time of the pandemic. She says the standards have nosedived because "the industry has been really working towards a minimum scope of work."

Not all janitors have suffered due to the pandemic. Some are treated well Some are even getting raises and are able to work more during the day than at night.

The janitors at Disney World in Florida are empowered more than usual by being given smartphones which they can use to report guests who fail to wear masks as mandated by the park. At Disneyland in California, janitors helped lead a charge to stop the park's reopening.

The New York Times' report is extensive and worth a read. To take a greater look, click here.