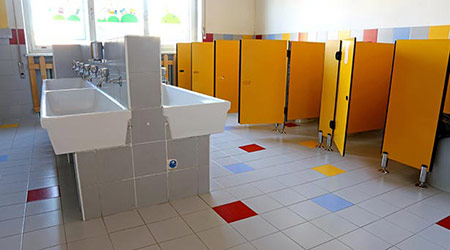 Many kids are going to extreme measures to better ensure they don’t have to use the school restrooms they deem unclean. While dirty restrooms are bad, this act of avoidance is in and of itself dangerous as it could cause kids to embrace negative life-long habits pertaining to restroom use.

British website Tes reported that schools are introducing rules mandating that toilets be locked during class, forcing kids to be accompanied by staff if they want to use the restroom during this time. The reality has some concerned that these policies further extend the issue of kids skipping the restroom when they should in fact be going.

More than half a million students in British secondary schools say they don’t consume liquids at school and another 10 percent say they skip eating so that they can better avoid the restrooms, the story says, citing research from Essity. When asked why they were avoiding the toilets, about half of the students say it's because they find them to be dirty, while nearly 20 percent say they’re unsafe. Just over 10 percent of those surveyed say they skip the restrooms due to a lack of toilet paper or soap.

Health risks tend to arise shortly after kids begin skipping the restroom. A number of students say their aversion to food and drink has lead to headaches and trouble focusing in class. Some students are soiling themselves because they’re skipping the restroom, making them susceptible to bullying.

To solve this issue, schools should do a better job of educating students of the importance of hygiene, diet, and using the toilet whenever needed, the story says.

Much of the problem can be solved through the cleanliness that occurs after custodians go back to the basics of cleaning. Custodians should strive to disinfect all touchpoints, toilets, urinals and sinks often. A strong emphasis should also be placed on the inspection and restocking of vital supplies such as toilet tissue, soap and paper towels.

Another way to make restrooms more inviting is to reduce the odors that plague them, say earlier reports. After disposing of the smell, custodians can improve the perception of the restrooms cleanness by exploring a number of tools that create pleasant fragrances.