The Real Reasons Employees Are Quitting 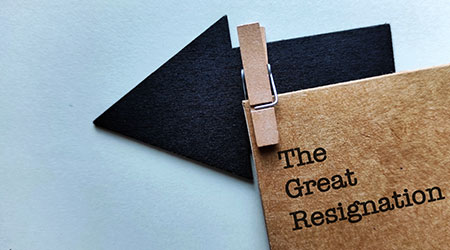 The high level of turnover within frontline workers is nothing new to the commercial cleaning industry, but in recent months nearly every market has been experiencing similar challenges. As reported by SmartBrief, a recent study conducted by McKinsey indicated that 40 percent of participants plan to leave their positions within the next six months — a continued trend of what has been dubbed “The Great Resignation”

In the Untied States for September alone, over 4.4 million employees quit their jobs, following the path of almost 24 million workers in total since April 2021. The study believes that many of these resignations stem from management not understanding the reasons for why employees become disgruntled. As a result, they aren’t properly equipped to address the issues before it’s too late. It’s a misnomer in many reported cases that salary and work-from-hone flexibility are the key reasons employees decide to look else where. Instead, it’s simply a matter of feeling respected and having a sense of self worth.

According to the study, the top three reasons employees are leaving work are:

Employers could truly mean well and believe they have a good pulse on what their employees value most. They can conduct studies, or even anonymous company surveys allowing people to speak their minds. The issue is that ultimately, it’s difficult to get a real answer without sitting down with them directly, even if it turns into a difficult or uncomfortable conversations. The three aforementioned reasons for quitting were the most common for that particular group of survey respondents, but for your own company, it’s simply a template for what could be the case, and nothing more.

It’s admirable for companies to take steps to address what they believe are the biggest employee issues — be it gaps in salaries, or a un-preferred work location in an office. But direct conversations with employees are essential to knowing where to start making strides. Not all employees are easily vocal about concerns, but that doesn’t mean that don’t have a voice.