The Handshake And Kiss Will Return After Coronavirus 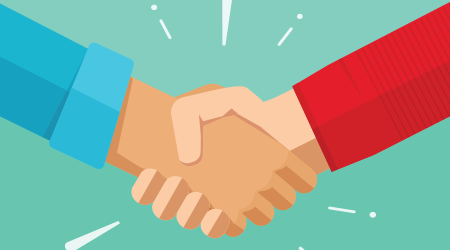 It has now been about three months since much of the world began instituting heightened infection control measures to stop the spread of the COVID-19 pandemic. One of the first things to go was the handshake and the kiss used for greeting - both fantastic ways to spread germs from one person to another. But while it appears that a post COVID-19 world will include a lot of changes to stop future outbreaks, history suggests the handshake and kiss will return, reports Bloomberg.

The world has experienced plenty of deadly outbreaks before, such as the bubonic plague. But even that didn't stop physical expressions of love and friendship.

As one European historian tells Bloomberg, England's King Henry VI actually banned kissing in 1439 as way to slow the spread of the horrific disease. Henry's reasoning could very well have been the fact that knights would often kiss the king out of respect and Henry didn't want to take any chances in catching the plague.

Of course, Henry's ban on kissing wouldn't last forever. In fact, the act of kissing became so common again in England by the end of the century that a visiting Dutch philosopher wrote that the act was visible wherever he turned.

Another plague struck London more than a century and a half later. As a result, kissing was replaced by curtsying and waving, according to "The Science of Kissing," reports Bloomberg. Again, kissing would eventually come back into favor and the practice was later shared by European explorers to the rest of the world.

Believed to have been made popular during the reign of the Roman Empire, the handshake has been a favorite form of greeting ever since. And experts say the practice is such a part of society that it will be a hard habit to kick.

Marcel Danesi, who teaches anthropology at the University of Toronto, tells Bloomberg that the hand shake and kiss will probably return from its hiatus soon after the COVID-19 pandemic ends - whenever that will be.