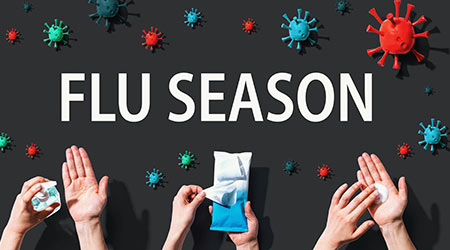 With the United States battling the COVID-19 pandemic for nearly a year, public health deserves a break. It appears like the the usually nasty flu season is at least showing some mercy.

Released on Friday, The Centers For Disease Control And Prevention's (CDC) latest Weekly U.S. Influenza Surveillance Report shows that flu activity remains lower than usual throughout the entire United States and its territories, such as Puerto Rico and the Virgin Islands.

Each weekly report includes a map that demonstrates the activity of influenza-like illness (ILI) in each state and nearby U.S. territory. The states and territories are then labeled based on ILI activity level in a descending order of severity, the order being very high, high, moderate, low and minimal. The latest report shows that Tennessee is experiencing low ILI activity, while the other 49 states are experiencing minimal activity. The report the week before showed five states to be experiencing low ILI activity, so things are actually getting better, not worse, according to the one metric.

Despite the unusually low flu activity being showcased in the United States this flu season, the CDC still encourages people to get the flu vaccine. The CDC also said that flu activity could still increase over the coming months.