The Difference Between A Tough Boss And A Bad One 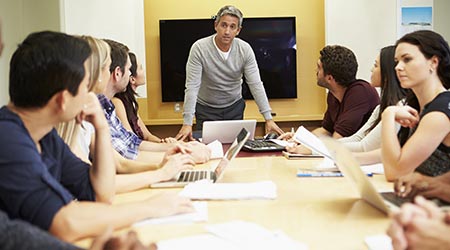 It's often said today that people don't quit their job, they quit their boss. With employee retention being as big of a deal as it is, businesses can't afford to lose quality employees due to bad management. But businesses also can't blame a boss who loses employees because he or she holds their workers accountable and does well to get the most out of their capabilities.

To help discern the difference between a tough boss and a bad one, SmartBrief separated the two by five differences: feedback, delegation, focus, presence and managing expectations.

For example, a tough boss isn't afraid to give feedback, whether it's good or bad. Tough feedback might be hard for employees to take, but it's the right thing to do if it helps them improve. A bad boss often fails to do one or the other. Either they look for mistakes to point out or they're afraid to offer criticism.

When it comes to delegation, a tough boss will monitor the overall progress of a task undertook by a person or group of employees and will step in when necessary. A bad boss tends to micromanage, which nobody likes.

A tough boss needs to be focused. They shouldn't just look at the task at hand, but rather the big picture. They want to get a good view of how employees are progressing or regressing. They also care about an employee's feelings. A bad boss only pays attention to tasks, and does little to care for the person doing them.

It's important that managers be present. A tough boss is able to keep their wits about them even during chaos. If things begin to get tough, they're able to restore order to the situation. They also allow their staff to take in the glory when things are going well However, a bad boss looks out for his or her own good when things aren't going well and is quick to take credit when times are good.

Finally, tough bosses put demanding, but reasonable expectations in place. What they ask can take employees out of their comfort zone, but it also won't ruin them. They also provide some guidance so that employees can achieve those high expectations. Bad bosses have no idea how difficult or easy the job is that they're asking the employee to do. They put the goals in place and then don't return until they deadline has been reached.

Want to know what kind of boss you are? Read all of SmartBrief's article here.