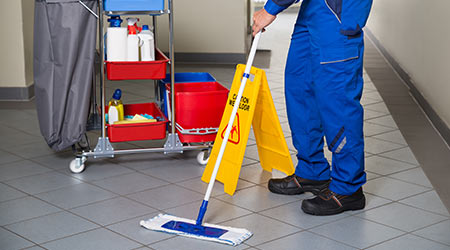 The seeds of Cason Building Maintenance, Inc. were planted when owners Rob and Susie Cason began cleaning buildings and homes as teenagers, according to an article on the Columbia Business Times website.

Their work ethic became the foundation of their future company. And Susie describes Rob as “the heart and soul of Cason Building Maintenance, Inc.”

But it all began with two young people just getting a job done. Thirty-five years later they have an established commercial cleaning business, employing 60 employees from their Columbia, Missouri, headquarters.

The company began by cleaning Orscheln Industries, of Moberly, Missouri, in October 1982.

The Casons’ church gave them an “antique” vacuum cleaner to get them started, Susie said, as well other cleaning necessities.

After flourishing for a little longer than a decade, business started to decline as Moberly’s economy suffered. The couple decided to relocate the business to Columbia in 2003. The company now services parts of northern, central and eastern Missouri.

In October 2017, Cason celebrated 35 years of business. Orscheln still remains one of Cason’s most valued customers.

Read more about the company here.