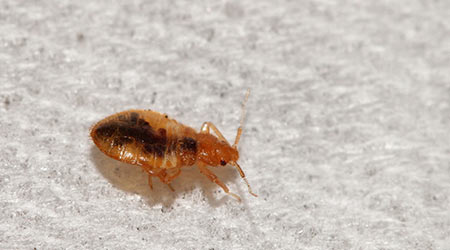 A 13-year-old boy in Cincinnati started an apartment building fire that displaced eight people and caused $300,000 in damage while trying to kill a bed bug. The fire began when the teen lit a match after pouring alcohol on a bed bug, according to an article on the 10TV website.

Obviously, there are safer — and more effective — ways to get rid of these pests. A study from Penn State and North Carolina State found that a new fungal biopesticide is highly effective — even against bed bug populations that are insecticide resistant.

The research suggests that a new mycoinsecticide may provide a new tool for managing bed bug infestations.

There is evidence that many bed bug populations have developed resistance to pyrethroid insecticides. This resistance may lead to cross-resistance to other classes of insecticides, according to an article on the Infection Control Today website.

Aprehend is based on Beauveria bassiana, a natural fungus that causes disease in insects. Previous studies have shown that the formulation can be applied as a long-lasting barrier treatment, according to the article.

Bed bugs that cross the barrier acquire fungal spores and go on to spread these among insects that remain in their harborages, resulting in greater than 95 percent mortality within a week.

But before you can kill them, you have to find them. When cleaning crews are checking for pests, they should focus on chairs and couches as well as mattress seams and behind the headboard for evidence of bed bugs. Even if no insects are seen, their droppings are a clue there may be a problem. Fecal spots are roundish, dark brown to black, and typically with several in the same area.