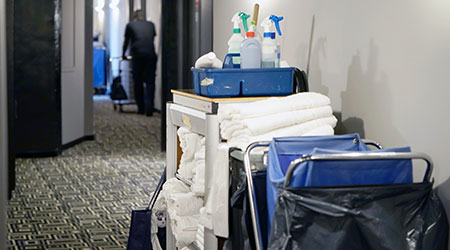 Housekeepers at the Philadelphia Marriott Downtown say an app designed to streamline the cleaning process by allowing managers to give them room assignments on-demand has actually made their jobs harder, according to an article on The Inquirer website.

Each cleaner gets an iPod every morning with an app that indicates which rooms they have to clean. They press a button to signal the job is completed.

They don’t have to keep track of a paper schedule or dial a code into the guest room phone to let the front desk know the room is clean. But the cleaners say the new system doesn’t allow them to organize their day and makes the work more physically demanding, as it sends them criss-crossing the hotel all day.

With the paper schedules, Kat Payne, a housekeeper at the Marriott for the last eight years, had her days down to a science, the article said.

Payne cleaned the occupied rooms first because they were quicker than checked-out rooms and guests who appreciated their rooms being cleaned by the time they returned at the end of the day. Now she has to follow the assignments given to her by the app. That can mean doing occupied rooms much later, sometimes upsetting guests.

Also, the app gives only a few assignments at a time, so there’s no way to plan an efficient route —particularly important at a large hotel.

From management’s point of view, the app offers more control over the staff’s activities. The app also collects data, allowing Marriott to track how long it takes to clean a room.

But even if technology makes workflow more efficient, there are often “hidden off-loaded costs,” according to Julia Ticona, from the Data and Society Research Institute. Ticona focuses on how technology intersects with work.

In this case, while management has more control to give room assignments on the fly, it comes at the expense of housekeepers’ flexibility to determine how they’ll organize their day, Ticona said.