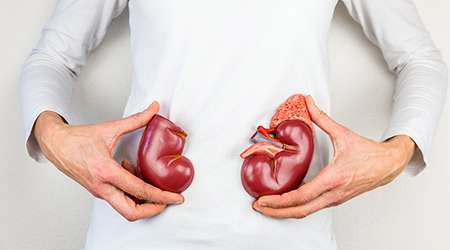 A group of teachers at Kimball Elementary School in Minnesota began to notice that Patrick Mertens, the school's quiet, reserved custodian was missing a few days of school each week. Once they figured out that the reason he was leaving was for dialysis and that Mertens was in need of a kidney transplant, the teachers stepped up by raising money to help pay for the cost of his operation. The story would have already been a "feel good" tale if it ended there, but it didn't. The actions later taken by one teach in particular took  this story from joyful to life-changing, as the Star Tribune reports.

Erin Durga, who teaches third grade at the school, read in a Facebook post from Mertens' daughter that the man's family would be unable to donate their own kidney. Durga responded by applying to donate one of her own kidneys.

After taking DNA tests, meeting online with a nephrologist for four hours, then a nutritionist, social worker, transplant coordinator and transplant surgeon, Durga advanced to the stage of taking a couple more tests and imaging work. After all of this, Durga finally got word that her and Mertens were a match. She was going to have the opportunity to save Mertens' life.

Eventually, the two underwent surgery and everything went well. Today, both Mertens and Durga are back at school, working the jobs that brought them together in the first place.