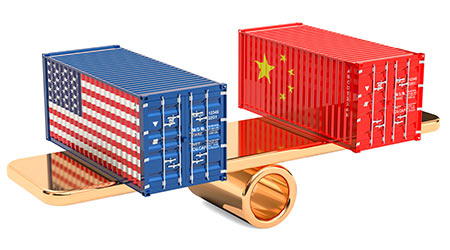 Experts in the jan/san industry have said they fear the trade war between America and China will hurt the entire supply chain, and those concerns will continue. According to a report, the U.S. will likely go forward with plans to increase the taxes it’s implementing.

President Donald Trump says he anticipates the United States will increase the tariffs imposed on $200 billion of shipments from China to 25 percent, according to an interview published Monday by the Wall Street Journal. Trump, who is slated to meet with Chinese leader Xi Jinping at a summit in the coming days, says it’s “highly unlikely” he would agree to China’s request that the U.S. refrain from increasing the tariffs.

Trump also tells the Wall Street Journal that he would apply tariffs on all other Chinese tariffs that don’t yet have duties should the negotiations become negative.

The tariff war between the two world super powers has been permeating for months.

The Office of The United States Trade Representative (USTR) officially released Sept. 18 a list of roughly $200 billion worth of Chinese imports that it will subject to tariffs. An initial 10 percent tariff was placed on the items later that month and had been slated to increase to 25 percent Jan. 1, 2019. The USTR said at the time that the tariffs it has placed on China are a “continuing response to China’s theft of American intellectual property and forced transfer of American technology.”

John Dunham and Associates concluded in a separate study that the USTR’s August announcement that tariffs would be placed on about $16 billion worth of Chinese product could cause a price increase of around $96 million for chemical distributors.

ISSA has also been worried by the taxes. In a response to the government’s announcements, the association sent the USTR a letter expressing strong disagreement with the tariffs the U.S. has imposed against China.

The majority of the products related to the cleaning industry that have been or could be impacted by the tariffs are intermediate parts or ingredients manufacturers would use to develop things like mops, buckets, brushes, and cleaning product formulas, says the letter.