Sustain One, American Paper Converting And WAXIE Honored By The Seattle Mariners 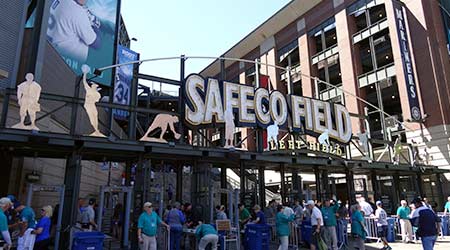 The Seattle Mariners have established diversity goals that align with the Supplier Diversity Program of Major League Baseball (MLB) in their purchasing practices. Sustain One is a Woman-Owned Small Business as well as a Minority-Owned Business that partnered with WAXIE to help the Mariners exceed their goals.

Ms. Work has owned Sustain One for more than 22 years. After emigrating from Nicaragua, she received a degree in Chemical Engineering from the University of Washington in 1974. She worked in the paper product industry for several years prior to forming American Paper Converting (APC) in 1997, which is the parent company of Sustain One.

Lydia Work and WAXIE were honored on the 100th anniversary of the birth of baseball legend Jackie Robinson on the Mariner’s home field. They met Seattle Mariners owner John Stanton, and a beautiful commemorative award was presented to Lydia with the number “42” in honor of Jackie Robinson.

During the presentation of the award Norma Cantu, Director of Procurement for the Mariners, spoke of the hard work and exceptional dedication displayed by Paul Rebner of WAXIE, and the special and unique partnership that exists between WAXIE, Sustain One/APC and the Seattle Mariners.