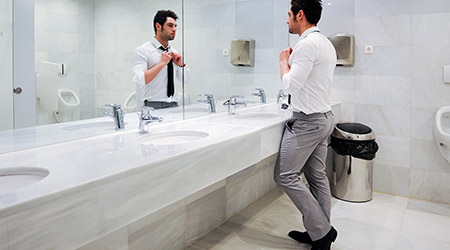 In the United States, public restrooms can be found almost everywhere – at parks, museums, stores, gas stations and airports. That’s a good thing because nearly 60 percent of Americans say they use a public restroom one to five times a week. For others, it’s a very good thing because 21 percent visit them at least six, if not 15 or more, times a week.

The findings are part of an annual handwashing survey conducted by Bradley Corporation that queried 1,264 women and men throughout the country.

Besides using the toilet and washing their hands, the top five things Americans do in a public restroom are: check their appearance, blow their nose or cough, get away, use their cell phone and change clothes.

While younger adults are significantly more likely to use their cell phone, “get away” and change their clothes in a restroom, older Americans are more likely to check their appearance.

“When we looked at how people ‘get away’ in a public restroom, we found 27 percent use it as a place to take a mental health break, avoid someone, hide and even cry,” says Jon Dommisse, director of strategy and corporate development for Bradley Corp. “We’ve been conducting our handwashing survey for the past 10 years and have uncovered many different findings. This year, it’s interesting to see that almost a third of the population go to the restroom for respite.”

There are also family restrooms, which have grown in popularity in the past decade. In fact, 76 percent of moms and dads have availed themselves of a family restroom. Besides using the toilet, parents wash hands, change a diaper, change clothes, wash a child’s face and calm a child.

“Our survey this year shows that public restrooms meet so many needs,” says Dommisse. “They are a space that’s important to everyday life for hundreds of millions of people.”

Americans depend on public restrooms so much that 64 percent have made a conscious decision to frequent a business based on the fact it has cleaner, well-maintained restrooms. In addition, one in three say they’d be willing to pay to use a clean, well-stocked restroom.

Unfortunately, nearly 70 percent of Americans report that they’ve had an unpleasant experience. Toilets that are clogged or not flushed, empty or jammed toiled paper dispensers and partition doors that don’t latch are the primary aggravations.

“Based on the problems consumers have encountered, it’s not surprising to hear that their top requests are restrooms that are kept cleaner, better stocked and have touchless features,” says Dommisse.