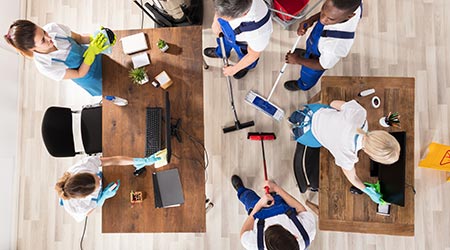 Office workers in the UK were recently surveyed about their hygiene habits and opinions at work and the results were a little disturbing, according to an article from Business Matters.

Just 61 percent of those surveyed (by UK office cleaning company SMC Premier) wash their hands with warm water and soap after using the restroom.

Women are somewhat more hygienic than men, according to the survey. A total of 66 percent of woman wash their hands after a bathroom visit, compared to 53 percent of the men.

Age also seems to play a role in proper hand hygiene. Eleven percent of workers under the age of 24 confessed to not washing up before leaving the restroom.

Beyond the bathroom, the survey revealed hygiene habits in personal work spaces. A little over a quarter (26 percent) of office workers remain at their desk to eat at least 1-3 times per week. Four percent say they have no choice but to eat at their desk every day.

Despite the popularity of eating at their desks, only 11 percent of workers will clean their work area properly. Thirty-eight percent will do a "quick clean" – toss snack wrappers or empty the crumbs from their keyboard. Meanwhile, 45 percent say they are spotless eaters and never need to clean up.

The over 65s are careful about making a mess when eating at their desk with 72 percent claiming that they don’t need to clean up, compared to just a third of the Millennials.