Survey: Failure To Halt The Spread Of Flu At Work 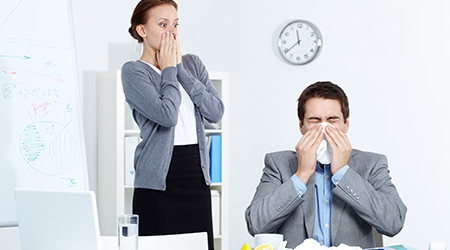 Every year, workplaces throughout the U.S. become incubators for the flu virus, with employees and employers likely fueling the flames, according to a new survey from Staples Business Advantage, the business-to-business division of Staples, Inc. More than two in five employed adults (44 percent) reported contracting the flu last year, and 45 percent of those respondents blamed their colleagues – yet many workers and employers are failing to take proactive steps to prevent the disease’s spread.

Chief among the shortfalls is the persistence of presenteeism. Though the CDC reports that individuals with the flu can be infectious one day before symptoms show and up to a week after becoming sick – and that they’re most contagious three to four days after becoming ill – employees who had the flu last year took an average of just 2.7 sick days. This means many returned to work when they were at peak contagiousness. More than half of respondents who had the flu last year (53 percent) said they came back to work before they felt better.

Respondents also eschew one of the most important steps they can take to keep themselves and their coworkers healthy: a minority of workers (47 percent) report that they typically get the flu vaccine.

“The flu shot is the best and first step everyone should take to stay healthy each year. But taking a sick day when you’re feeling unwell – even if you think it’s just the common cold – is also an extremely effective way to stop the flu from spreading throughout the office,” said Riley Doherty, facilities health and safety expert and Area Vice President with Staples Business Advantage. “Measures like hand sanitizer and disinfecting products can help contain an outbreak, as there are so many surfaces that serve as vectors for the virus – such as refrigerator handles and doorknobs – that everyone touches multiple times a day. So, do your coworkers a solid: get vaccinated early, consistently clean and disinfect your workspace, and stay home when you’re sick.”

Employers: Falling Short
Employers could be doing more to foster a healthier workplace and curb the flu, as well. When asked what their workplaces do to combat the flu, respondents shared that:
• Only 53 percent of their workplaces offer sick leave
• Just 51 percent offer cleaning services for common areas and bathrooms
• Less than half offer tissues (47 percent) and anti-viral cleaning supplies (43 percent)
• 36 percent offer vaccination days
• 17 percent allow employees to work from home

“Many employers have come to recognize the importance of workplace wellness, and well over half of the respondents in our survey say their employers offer a dedicated program,” added Chris DeMeo, workplace guru and Vice President, Staples Business Advantage. “But clearly blind spots remain in terms of what we mean by ‘wellness’. Gym reimbursement and healthy snacks are trendy, but employers need to cover the basics, too. Simple cleaning services, education around healthful habits and annual health assessments as part of a benefits program can go a long way towards avoiding the lost productivity caused by a flu outbreak in the fall and can help build healthier employees year-round - which means a more engaged workforce and lower health insurance costs for the employer.”

Leading the Way on Wellness
Baby Boomers are the most aggressive when it comes to flu prevention. Compared to their Millennial and Gen X peers, Baby Boomers had the lowest rate of returning to work before they felt better after having the flu (42 percent), and 59 percent say they regularly get the flu vaccine. Their proactivity has paid off, with less than a third reporting they caught the flu last year.

Meanwhile, women are more proactive about protecting their own health. When asked which steps they personally take to avoid the flu both in and out of work, women appear to take the task more seriously:

Concern Following Recent Flu Seasons
Forty-nine percent of respondents say they are about as concerned about the flu this year as they were last year, which was an unusually aggressive flu season. According to the CDC, by the end of the week of December 23, 2017, the flu was widespread in more than two-thirds of the U.S. – and was widespread through almost the entire U.S. between the weeks ending December 30, 2017 and March 3, 2018.

“Flu can be a serious illness for even healthy people,” said Judith Monroe, MD, president and CEO of the CDC Foundation. “Fortunately, the Centers for Disease Control and Prevention recommends everyday preventive actions to fight flu this season, including getting a flu shot, practicing good hand hygiene and staying home when you are sick.”

Staples Business Advantage commissioned research group ORC International to conduct a poll of Americans on their sentiments about the flu. The online survey was conducted among a demographically representative U.S. sample of more than 1,000 adults 18 years of age and older who are employed full or part time. Participants were polled between October 4 and 10, 2018.