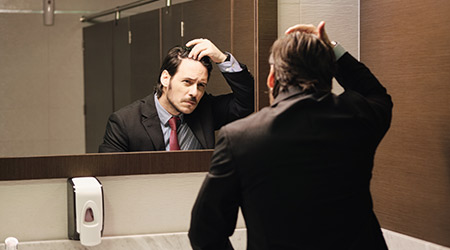 According to QS Supplies, more than a quarter of people don’t check a public toilet seat’s rim and 69 percent don’t line the seat with paper before using. The study also shows that perceptions of public restrooms differ across genders and regions. In fact, men are more concerned with avoiding personal contact in a public restroom, while women are more concerned with avoiding environmental contact.

When comparing United States and United Kingdom respondents, Americans are more likely to flush with their foot and line the toilet seat compared to their British counterparts.

- More than half of people don’t take any precautions to avoid touching a public restroom’s door handle.

- Nearly a third of people don’t flush a public toilet and 21 percent have clogged the toilet and left.

- Around half of women have used the last piece of toilet paper and not replaced the roll, compared to 43 percent of men.

- Overall, 58 percent of respondents check the toilet bowl’s interior before use, while 49 percent say they’re extra careful and wipe the seat even if it looks clean.

- Nearly one in 10 people have seen someone urinate or defecate outside of the toilet.