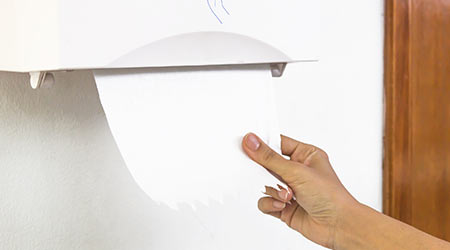 To identify which hand drying method is preferred in the U.S., Cintas Corporation commissioned a survey conducted online by Harris Poll, May 19-23, among 2,048 U.S. adults ages 18 and older. The study found that the majority of American’s (69 percent) prefer to use paper towels over air dryers when drying their hands in public restrooms.

“Hand drying plays an important role in effective hand hygiene,” said John Engel, Director of Marketing, Cintas. “Studies show that germs can be more easily transferred to and from wet hands, which is why drying hands after washing them is essential to staving off bacteria and limiting the spread of infection.”

Of those that chose paper towels as their preferred method to dry their hands in a public restroom, the top five reasons include:

“What this data tells us is that the majority of Americans want a quick, thorough and hygienic public restroom experience,” added Engel. “While paper towels reduce the number of bacteria on hands, air dryers increase them, leading to further contamination of not only clean hands, but other restroom users up to six feet away[i]. This makes paper towels a ‘no brainer’ choice for hand drying.”

Paper towels are not only more hygienic, but they are also better for the health of restroom users’ ears. In fact, jet hand dryers have the same impact on ears as a close-range pneumatic drill, and are especially dangerous for children’s ears as air dryers are typically positioned at the same height as a child’s head[ii].