Supreme Court Sounds Off On DACA 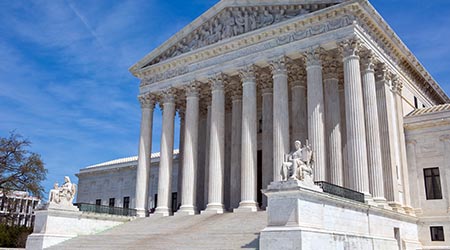 The U.S. Supreme Court is likely to side with the Trump administration’s call to end Deferred Action for Childhood Arrivals, better known as DACA, a program used to provide temporary United States residency to immigrants, reports USA Today.

Deployed by the Obama administration in 2012 DACA temporarily prevents the deportation of an unauthorized immigrant brought to the United States as a child, provided they were, among other things, under the age of 16 when they entered, were under the age of 31 as of June 15, 2012, and had not been convicted of a felony or serious misdemeanor, according to the U.S. Citizenship Immigration Services. President Donald Trump has long opposed the program.

On Tuesday The Supreme Court gathered for a more than hour-long argument on DACA. Some of the conservative justices say the Department of Homeland Security has provided sufficient reason to end DACA. The liberal justices, which currently make up the minority of the Supreme Court, say whether or not DACA should be ended should be decided by the Trump Administration’s claim that it is illegal.

The Supreme Court isn’t expected to rule on DACA until the spring of 2020, reports USA Today. If DACA is struck down at that time, most of those who benefit from the program will still receive protection until January 2021.

DACA and its legality has a large impact on the commercial cleaning industry as many companies employ DACA recipients for various positions. This story explains how the loss of DACA might impact the industry.