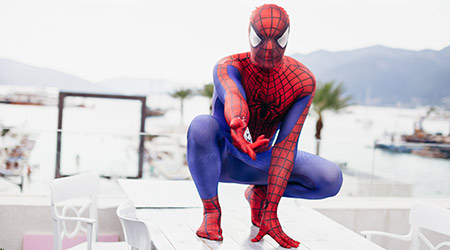 Employees from A Plus Window Cleaning in San Diego once again brought smiles to the patients at Rady Children’s Hospital by washing the facility’s windows decked out in superhero costumes. According to 7San Diego reporting, Captain America, The Hulk and Spider-Man gave the villains a break on Halloween to focus on cleaning glass and surprising sick kids.

For the past four years, Dennis Dwyer, owner of A Plus, went the extra mile to cheer up tiny patients on a day when most kids get to put on costumes and go trick-or-treating.

For instance, two-year-old patient Zachariah's face lit up when he came outside to see the superheroes in action, the article said. Zachariah was scheduled to undergo surgery that day to remove a mass in his throat and this was his only opportunity to celebrate the day.

Dwyer, dressed as Captain America, said he still gets choked up when he sees the reaction from children at the hospital.

Superheros don’t restrict their missions to Halloween — or SanDiego. Local window washers dressed up as Captain America, Spider-Man, Flash and Batman in July to cheer up kids at Blank Children's Hospital in Des Moines.

This was the third year in a row employees of Larry's Window Services dressed up. Dean O'Connor, co-president at the company, said the annual event makes his workers just as happy as the kids.

Chuck Davis, who dressed up as Spider-Man, the company used to rent the costumes, but they eventually bought them.

"We're so committed to it. Any chance that we get, we do it," he said in an article on CBS News.