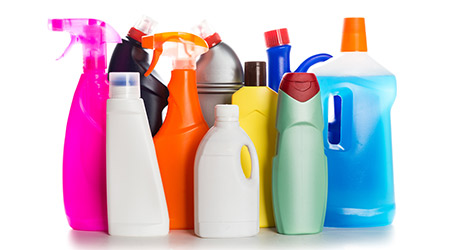 According to a new study, multi-surface cleaners and other commonly used disinfectants could be making children overweight by altering the bacteria found in their guts. Fox 5 Las Vegas reported that the study, published Monday in the Canadian Medical Association Journal, found infants living in households where antimicrobial disinfectants are used at least weekly were twice as likely to have higher levels of the bacteria Lachnospiraceae at ages 3 to 4 months than children whose homes did not frequently use disinfectants.

When the children with higher levels of bacteria were three years old, their body mass index (BMI) was higher than children who do not live in homes that frequently use disinfectants, the study said.

While the researchers found an increase in Lachnospiraceae with more frequent cleaning with disinfectants, they did not see the same association with washing detergents without the bacteria-killing ingredients.

In a published comment, Moira Differding and Noel Mueller, both of the Department of Epidemiology at Johns Hopkins Bloomberg School of Public Health in Baltimore, wrote that the study results were "biologically plausible" because the bacteria that we are exposed to during infancy both educates our immune system and programs the metabolic system.

The study also found that babies living in households that used eco-friendly cleaners had different microbiota and were less likely to be overweight as toddlers. Yet, an analysis of the data did not show that this altered bacterial community was linked to the reduced obesity risk in the children, the article said.