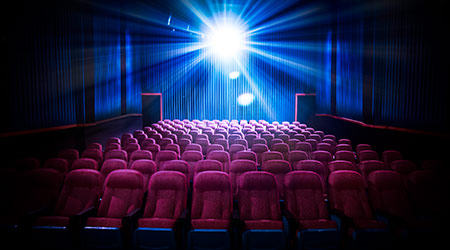 A study conducted in a large Portland, Oregon-based theater examined various surfaces for biological materials such as bacteria. An ATP testing device was used to "score" these surfaces. A score of 30 or less was considered safe, meaning there was little or no bacteria on those surfaces that could potentially risk human health. On the other hand, a score of 30 or more would be considered soiled, potentially soiled enough to endanger human health.

Touring the theater as if they were about to see a movie, here is what the researchers found:

Purchasing Tickets
This theater had several touchscreen ticket kiosks, which most moviegoers used to purchase their tickets. The testing device scored these touchscreens 92, more than three times the limit for safety.

Restrooms
The researchers then turned to the restrooms before seeing the movie.  The restrooms (doors, walls, and fixtures) tested reasonably well until the researchers conducted tests of the soap dispensers. The handles on these dispensers averaged 60, double the safety limit.

"Hopefully you're in the process of washing your hands right after you touch [the soap dispenser]," said Dr. Andrew Carroll, a local doctor who evaluated the results. "You wouldn't [want to] touch the dispenser and then just leave the bathroom."

A Surprise
One area scored exceptionally well, and that was the floors. When the floors were swabbed, to the researcher's surprise, the ATP device registered at only 1.

"I think the janitorial crew is giving it a very good clean," Dr. Carroll said. "But maybe this is also a good argument for going to the early matinee showing."

Theater Seats
Now that the researchers have made it into the theater, they find their seats. These had the highest bacteria counts in the theater, scoring 135, more than four times the safe and acceptable limit. This tells us that the armrests are rarely cleaned, or if they are, they are not cleaned sufficiently enough to kill potentially dangerous pathogens.

"While these scores are certainly interesting," says Brad Evans, Chief Executive
Officer of OptiSolve. "They may not be telling the whole story.

"Using imaging technology, we would likely see far more pathogens spread out over far larger areas than can be detected using swabs and an ATP device. It is very important that theater managers and cleaning professionals see the entire picture when it comes to protecting human health."