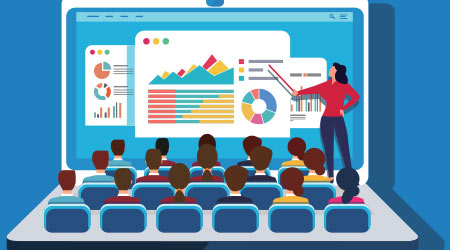 Conclusions reached by a February 2021 study prepared for colleges and universities finds that online and video training can prove very effective — even more effective - than traditional teaching methods.

In 2020, most higher education facilities were forced to close their doors. Student education was moved from the classroom to online and video training.

Many educators believed student learning would suffer. However, for a surprising reason, this proved not to be the case.

Not only was video training effective, on average, videos led to better learning outcomes compared with other methods, such as face-to-face learning.

While several reasons were pointed out, one of the most significant was that with video training, the student controls their education, not the teacher.

“This was because the student could repeat segments of a video until they better understood what was being taught,” says Matt Morrison, communications manager with Kaivac, developers of No-Touch Cleaning and online training tutoring systems.

“This put the student in the driver's seat — not the teacher.”

To conduct the study, researchers analyzed 105 prior studies regarding video learning, involving a pool of 7,776 students, mainly in the U.S. and Europe.

According to the researchers, “we identified more than 100 randomized trials that had used video in higher education, and on average, videos led to better learning outcomes compared with other methods, such as face-to-face learning” (italics added).

As to the study’s application for the professional cleaning industry, at least one manufacturer has developed onboard training systems that allow the cleaning worker to pause from their work, play a video, and then practice what has just been learned.

“It appears this is why video training proved so effective,” adds Morrison. “Not only is the student in charge of their education, but they can also set their own pace and [can] repeat segments as often as they like.”