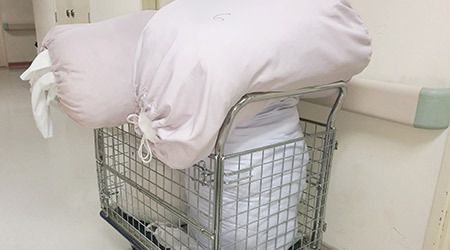 A recent study found about 10 percent of laundered linens tested positive for Mucorales, a type of fungus, at 20 percent of the hospitals analyzed.

According to the report, published in Clinical Infectious Diseases, researchers examined freshly laundered linens at 15 transplant and cancer hospitals in the U.S. Linen delivery vehicles were intercepted by researchers at each hospital between May and December 2017.

At 33 percent of the hospitals, the linens were visibly unclean and the laundry carts were unclean at 20 percent of the facilities studied. According to Infectious Disease Advisor reports, these visual inspections showed evidence of hair, lint, insects, or other evidence of soiled cloth.

Mucormycosis outbreaks have been linked to contaminated linen. Mucormycosis is a life-threatening condition caused by infection with Mucorales spores and is associated with mortality rates of up to 50 percent.

University of Pittsburgh Medical Center was sued in 2017 by families of patients who died of mold infections linked to linens, according to Post-Gazzette reports. Seven patients died after contracting mold infections at UPMC hospitals between October 2014 and October 2016. The lawsuits alleged that what links all seven cases at the three hospitals were the linens.