Study: Germs And Cross-Contamination In Airports 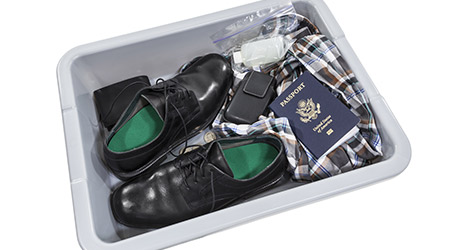 Millions of Americans travel through airport security lines every day. In the process, these individuals shed clothing, extract personal items from bags and remove shoes. The process also creates strong potential for transmission of germs and cross-contamination, and many of those germs land in security line bins.

CBS News recently reported on a study that found that airport’s security bins are teeming with the germs that can cause the flu and the common cold.

Researchers from the University of Nottingham in England and the Finnish National Institute for Health and Welfare looked at frequently touched surfaces three times at Helsinki-Vantaa airport in Finland during peak flu season in 2015 and 2016. Half of the trays at security check points tested positive for germs, including influenza A and rhinovirus.

Meanwhile, study researchers also examined airport restrooms in an effort to gather germ counts. According to the results, none of those germs found in security lines were found anywhere on the surfaces of the airport toilets.

While not everyone who comes in contact with germy surfaces at an airport will end up getting sick, washing hands more frequently with soap and warm water is always the best bet. The CDC recommends scrubbing hands for at least 20 seconds.

The study suggested that the risk of spreading illnesses in airports can also be cut by having hand sanitizer available to passengers before and after security screenings and wiping down plastic bins more often.

Those passengers traveling through the Akron-Canton Airport in Ohio, however, are covered. The airports security bins have special liners to minimize cross-contamination. Powered by light, the liners’ surface uses mineral nano-crystals, which create an oxidation reaction stronger than bleach that continually kills germs.