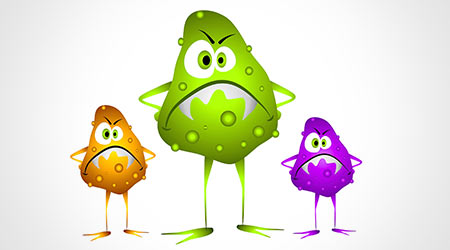 A BC Centre for Disease Control study says 80 percent of infections come from items people touch every day. Keys and money are known culprits, but rising in the infection rank are personal cell phones. WWLP recently reported that in a 2011 study, London School of Hygiene researchers found fecal matter on one of every six smartphones.

On any given day people grab keys, reach for the office door knob, go to the restroom, take a phone call, pump gas and pay with money. People touch thousands of items, but never stop to think about what could be growing on them.

According to reports, building occupants understand that bacteria is spread by someone not covering up when coughing or sneezing, but they don't always connect how those same contaminants spread via their hands.

If someone touches a soiled item, like their smart phone, and then touches a doorknob, that knob now harbors germs. The next guy in line touches the knob and then itches their eye and the bacteria now has access to the body. This is one very common way infections spread throughout a facility.

According to Dr. Charles Gerba, microbiologist from University of Arizona, surfaces in daycare centers, playgrounds and bus travel centers harbor some of the highest levels of contaminated surfaces. Offices and healthcare settings, because they are cleaned more frequently, harbor less than one third of the bacterias found in daycares.

In fact, the surfaces within an office found to be contaminated aren't what most people would think. The toilet, according to Gerba, is relatively clean. It only harbors almost 50 germs per square inch. This is compared to employee phones and keyboard that harbor roughly 25,000 and 21,000 germs per square inch, respectively.

To learn more about how to identify and prevent germs in the workplace, click here to access a free educational webcast.