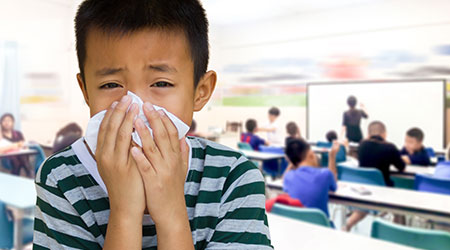 Following its own two-year study, Flagler School in Bunnell, Florida has concluded that daily disinfection of the school using an electrostatic sprayer reduced absenteeism by 14 percent during the 2019 school year.

The study, shared by the school in the press release, was conducted using the Clorox Total 360 System variety of electrostatic sprayer. Data from the 2019 school year was compared against the previous year.

For the duration of the 2017-2018 school year the district used the electrostatic cleaner once a month and conducted manual cleaning each day. During the 2018-2019 school year, Flagler used electrostatic technology daily in one of its elementary schools, and stuck to its old method in another. Those two schools were then compared against the absenteeism rates for 2018.

The school that received daily treatment from the electrostatic technology reported the 14 percent reduction in absenteeism and no outbreaks of illness. The other school saw a decline in absenteeism, though it was less significant.

Some months are of course worse than other for absenteeism at school. One of the worst months is December. The Flagler School that used electrostatic technology each day was able to reduce its absenteeism rate for December 2019 by 53 percent compared to the previous year.