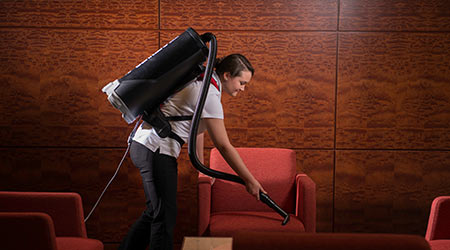 Innovations in commercial cleaning equipment can have a significant, positive impact on the productivity of cleaning crews, thereby reducing the cost of equipment ownership. This is according to a time and motion study commissioned by Sanitaire. The study also found minimal difference between upright and backpack vacuums in the time it takes to clean large commercial spaces.

The study conducted by the American Institute for Cleaning Sciences (AICS) found that backpack and upright vacuums can clean two to five times more square footage per hour than the ISSA 612 Cleaning Times study reported. The AICS study also found there is much less productivity difference between uprights and backpacks than the earlier study suggested. The AICS results offer another resource to help inform cleaning professionals' equipment and staffing decisions. The results can provide guidance to help contractors assess the true cost of cleaning by calculating the hours required for vacuuming a commercial building and the number of employees to do the work.

Researchers tested both 12-inch and 15-inch commercial upright vacuums as well as corded and battery-powered backpack vacuums in the study. Six workers, three men and three women, vacuumed confetti dispersed throughout the spaces to simulate traffic vacuuming – the method most commonly used for commercial buildings.

The data suggested the increased maneuverability, low weight at the vacuum handle and the added propulsion created by improved brushroll spin minimized stress for the upright operators, and better comfort and easy access to attachments for backpacks permitted the workers to clean faster.

The AICS results can help commercial cleaning professionals determine workloading requirements by calculating the total annual square footage to be cleaned, the hours required to vacuum that space, the number of employees required to do the job and the cost of wages and benefits for those workers.

"When selecting commercial vacuums, cleaning professionals should examine more than the purchase price of the machine. A product's contributions to productivity, ease of use, ease of equipment maintenance and long-term reliability of the machine may be even more important to ensuring profitability,” said David Parkes, General Manager, Sanitaire.