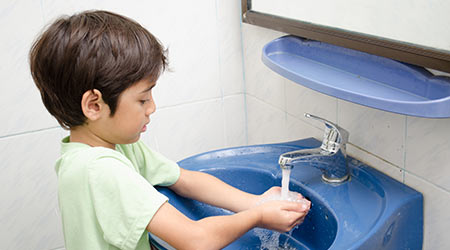 This year seems to have drifted society even further into some bizarre alternate universe now that researchers are claiming that singing “Happy Birthday” during handwashing could be harmful.

Health experts at Lund University in Sweden monitored people singing while hand washing and found that consonant-heavy lyrics (like those found in “Happy Birthday”) cause more respiratory droplets to float through the air in an aerosolized state, reports the New York Post. “Happy Birthday” is particularly significant because some experts have suggested singing the song two times over while washing one’s hands helps ensure hands are cleaned long enough.

The researchers say a dozen of the study participants emitted aerosols while singing. Prior to this study, there had been no scientific investigation into the amount of aerosol particles and larger droplets that are shot out while a person sings, according to the university.

One of the study’s co-authors says words containing the letters B and P appear to spread the most droplets. This was discovered after the subjects sang the popular Swedish children’s song “Bibbis pips Petter.” That song has a similar amount of consonant sounds as “Happy Birthday.”

Two of the people participating in the study had tested positive for COVID-19, and their samples didn’t provide detectable amounts of the coronavirus. However, the same co-author says a person with COVID-19 can still spread the virus through the aerosols released during singing.