Studies Reveal Where Travelers Encounter The Most Germs 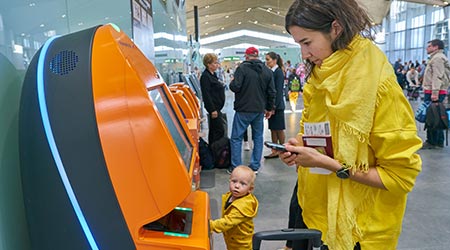 With a high probability of cross-contamination, it's not uncommon for travelers to contract an infection. But where they pick up that bug might surprise people.

According to Forbes reporting, kiosks, not restrooms, are the main culprit of cross-contamination. Restrooms are often perceived to harbor the most germs in a facility, but they are also a space that receives constant attention from cleaning staffs. Self-check kiosks don't receive that level of scrutiny and can become contaminated quickly.

For example, Insurancequotes.com sampled six types of surfaces at three different U.S. airports on three occasions. Their findings suggest that the self check-in touchscreens could expose travelers to more than twice as many "colony-forming units" (CFU) of bacteria and fungus as the lavatory flush button on the airplane.

Studies indicated that the average check-in monitors harbored 253,857 CFU, compared to an average of 95,145 CFU on the plane's flush button. The touchscreens also registered more than 10 times as many germs as water fountain buttons or the seat armrests at the gate waiting areas.

Some of the bacteria types found during air travel are less dangerous than others. Many are actually probiotic, meaning they can be positive for health.

Passengers are still on their own to fight infections at check-in kiosks, but reports say that the Akron-Canton Airport in Ohio is fighting germs in the security lines with containers that have special liners in the bins and on the handles.