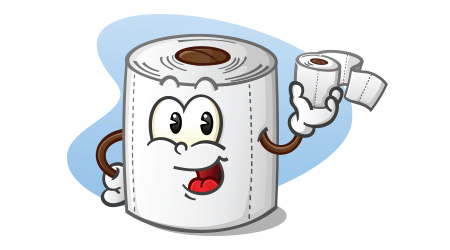 Like many kids, having to wipe using his public school’s single-ply toilet paper rubs Sekayi Fraser the wrong way. So much so that Fraser, 14, made changing the toilet paper at Cabin John Middle School in Potomac, Maryland the primary focus of his successful campaign for student body president. Unlike many politicians, Fraser is now sticking to his promise to clean up a stinky situation, reports WJLA-TV.

Fraser showed up Monday to Montgomery County Public Schools’ public hearing on the system’s proposed operating budget sharply dressed and ready to spar with the elected officials on behalf of his constituents.

Fraser told the school board members that an upgrade on the district’s toilet paper should be the top priority of its proposed $2.8 billion operating budget. He told the board that his fellow students felt so strongly about the toilet paper issue that his advocacy of the issue got him elected.

“It feels rough as sandpaper and is very thin which has led to many uncomfortable circumstances for students,” Fraser told the board, according to WJLA.

Instead of scoffing at a teenager’s attempt to advise the board on how it should allocate its budget, officials credited the points Fraser made and discussed the issue at length.

One board member admitted that adults have complained to the district about the quality of the toilet paper in school facilities and then asked staff for some rough estimates on the costs of the upgrade as well as how 2-ply paper would impact the district’s aging plumbing systems. Some quick calculations suggested an upgrade to 2-ply toilet paper would cost roughly $31,000 a year.

When one board member asked for a recommendation on a toilet paper brand, Fraser threw his support behind the “blue Charmin brand.” Realizing the event was being televised, his implored Charmin to donate that variety of toilet paper to his middle school.

The board eventually agreed to look into the costs of different toilet paper options and their impact on the school’s plumbing system.