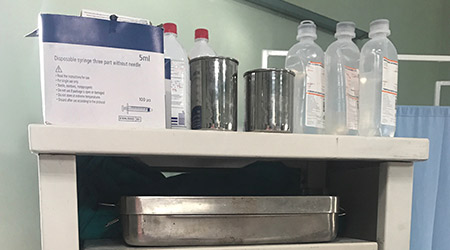 A cat recently caused an infection scare after it entered a hospital site and was found lying in a linen closet. According to a BBC article, a deep clean was ordered after the cat's activities came to light at Epsom Hospital in Epsom, England.

The Sun newspaper published pictures of "Monty" on a desk and in a stand-off with a rat "within hospital grounds," but health trust officials denied staff members were keeping it as a pet. Officials also said the affected area had been decontaminated.

The report in The Sun alleged staff bought the Burmese a basket, food and scratch pad and let him prowl around the emergency room. The Sun also said concerned hospital bosses "went nuts" when they discovered the cat and fired a staff member after an investigation.

Hospital officials said when they discovered an animal had entered one of its sites, an investigation was immediately launched. Additional CCTV cameras were installed in a storage area.

Infection control expert Professor Hugh Pennington said cats pose a low risk, but added that you "really can't have a pet wandering loose in a hospital."

The spread of norovirus - which causes vomiting and diarrhoea - could be a concern because the cat could carry the bug around the building on its feet, Pennington said.

Monty's real owner, who lived nearby, was traced when the cat was found to have a microchip.