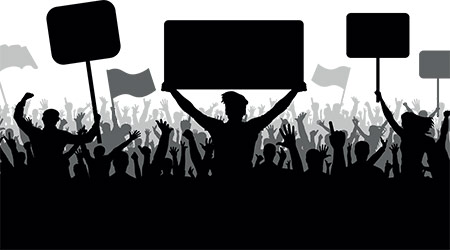 Yet another group of unionized janitors are on strike, this time in St. Louis.

The janitors marched on the steps of the Old Courthouse in downtown St. Louis, joined by the St. Louis County NAACP, whose president spoke of how black residents in the St. Louis area are much more likely to live in poverty than white residents, reports KMOX.

The janitors are protesting for a $15 an hour wage, which the NAACP says will lead to more economic equality throughout the area. The median hourly pay for the workers is currently $10.75, says the union representing the more than 2,000 janitors in the area.

Janitorial protests have been quite prevalent throughout America as of late, including some in its most notable cities. A massive standoff between janitors in the Washington, D.C. area and the commercial cleaning companies that hire them ended in mid-October after the two sides came to a new contract for the nearly 11,000 workers.

Several days after the resolution in D.C., hundreds of janitors that clean General Motors facilities in Michigan ended their strike after reaching an agreement with Aramark.